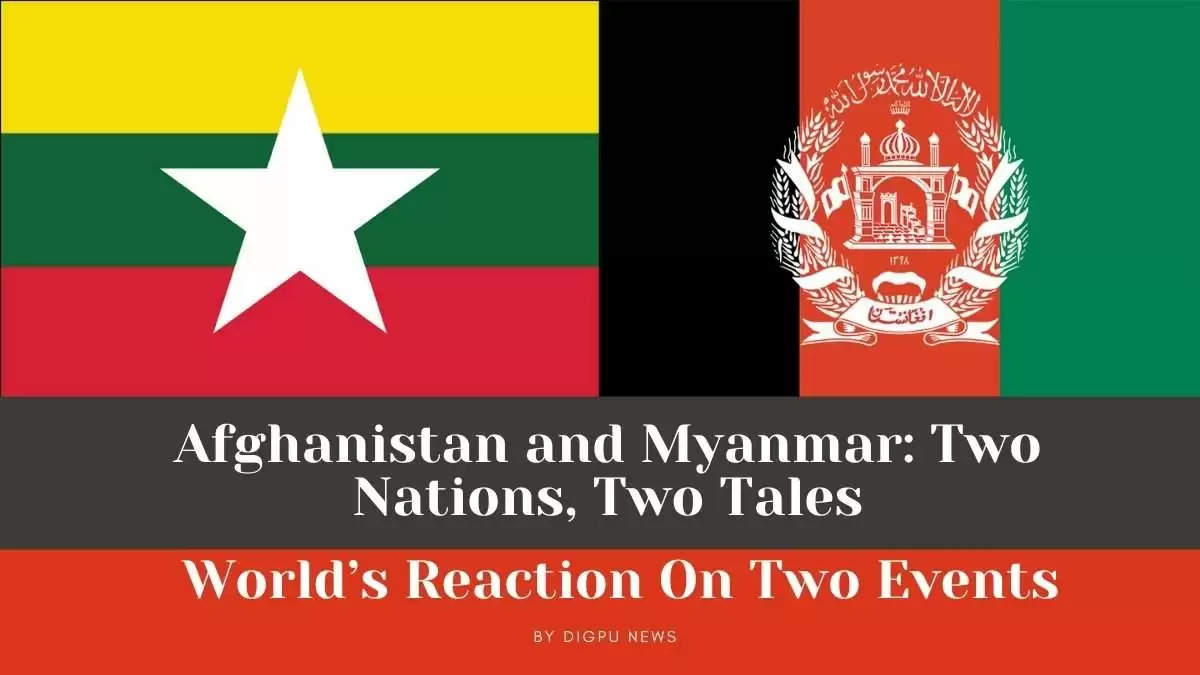 The military coup of Myanmar and the Taliban takeover of Afghanistan – How similar or different are they?

On February 1, 2021, the military seized control of Myanmar. Power was seized from the hands of the elected leader and Nobel Laureate Aung San Suu Kyi and her National League for Democracy (NLD) party.

Geographically, Myanmar is situated in South East Asia and in the middle of Thailand, Laos, Bangladesh, China and India. The country has a population of 54 million, belonging to a variety of ethnic groups who are predominantly Buddhists. However, the country has been in the news because of the treatment it has meted out to the Rohingya Muslim population.

The political history of Myanmar is more complex than it looks. The nation gained independence from colonial rule in 1948 but was ruled by the armed forces from 1962 to 2011. In 2011, a new era of civilian rule appeared to be dawning on the country with Aung San Suu Kyi and her NLD at the centre of it all.

Return of Democracy to Myanmar

Although democracy returned to the war-torn nation in 2011, it saw Aung San Suu Kyi and her NLD posting a landslide win in 2015. However, the problem was far from over. The Nobel laureate who had received the prize while in detention in 1991, was not allowed to become the head of the state. This was because she had children who were not citizens of Myanmar. Thus, instead of becoming the President, she took the official title of State Counsellor.

Again, in 2020, Suu Kyi and her NLD won the democratic elections by a landslide margin. But the army-backed Opposition started alleging election fraud and demanded a rerun. Then, what was actually supposed to be the first day of the Parliament, turned into the day Myanmar returned to military rule after a decade of army detention of Suu Kyi and other leaders of NLD.

In what seemed like a dramatized sequence, the army declared an emergency and handed the power to itself for an entire year. It was also revealed that Aung San Suu Kyi was in possession of seven walkie talkies she was not authorized to use. She was incarcerated and charged with the illegal import of communication devices used to rig the elections.

The story of Aung San Suu Kyi has been nothing short of being miraculous and inspiring, until the point she reached the International Court of Justice regarding human rights violations committed against the Rohingya Muslims by the Myanmar army.

Suu Kyi won the Nobel Peace prize in 1991, while she was under detention. When in a speech in 1988 she said, “I could not as my father’s daughter remain indifferent to all that was going on,” under the rule of dictator General Ne Win, she laid the foundation of a revolution for the liberation of Myanmar, drawing inspiration from Martin Luther King and Mahatma Gandhi.

But in yet another coup de’ tat on September 18, 1988, the military seized control and placed her under detention. Her house arrest in Yangon lasted six years until she was released in 1995. She was then arrested again in 2000, and released unconditionally in 2002. While under house arrest, she was not allowed to see either her children or her husband, who died of cancer, in 1999. The military had offered to allow her to travel to the UK to visit him when he was gravely ill, but she felt compelled to refuse, fearing she would not be allowed back into the country.

Though Suu Kyi rose to power democratically in Myanmar, she and her NLD partycame under fire for their treatment of the Rohingya Muslim minority in the country. The year 2017 saw a mass migration of the Rohingyas from Myanmar to neighbouring Bangladesh. The crisis became so humungous that the country stood accused of genocide. Myanmar is currently facing trial in the International Court of Justice for crimes against humanity.

A large number of Suu Kyi’s supporters who were very jubilant when she was bestowed with the honour of the Nobel had turned critical of her and her government. Her administration’s inability to stop rape, murder and genocide by refusing to condemn the still-powerful military or acknowledge accounts of atrocities turned the tables against her. At the same time, a few argued that she was a pragmatic politician, trying to govern a multi-ethnic country with a complex history.

Her global support further slumped when she appeared at the ICJ in Hague and personally defended and justified the army’s actions against the Rohingya minorities.

The Taliban Takeover of Afghanistan

Afghanistan, the graveyard of kingdoms, once again lived up to its name in the third decade of the 21st century. The United States declared a “War on Terror” in Afghanistan in the aftermath of the 9/11 terrorist attacks. The country was being ruled by the Taliban back then. The US troops successfully dislodged them from the capital city of Kabul and claimed to have “restored democracy” in the country with the installation of a democratically-elected civilian government. The longest war in the democratic history of the United States of America it was fighting in Afghanistan for close to two decades now spanned over 4 presidencies.

Who are the “Taliban”?

Former Afghan resistance fighters who had fought the invading Soviet forces in 1980, collectively known as “Mujahideen” in 1994, is today the Taliban. The aim of the group was to impose their interpretation of Islamic law on the country – and remove any foreign influence.

However, when the attacks of 9/11 took place in the US, leading to the death of 2700 Americans, the US declared a war on terror. It claimed that Afghanistan was providing a safe haven to the militant group Al-Qaeda. In one of the deadly attacks, Afghanistan was invaded by the US forces and the Taliban were driven out of Kabul.

The Taliban, however, were only displaced and not disbanded. For the last 20 years of the US-backed Afghan governments’ rule and the US’s occupation of Afghanistan, they have been fighting the allied forces in the form of an insurgent war.

The estimated amount of direct Afghanistan and Iraq war costs that the United States has debt-financed as of 2020: $2 trillion.

While the world was shocked at the overthrowing of Aung San Suu Kyi and her NLD party and the takeover of Myanmar by the army once again, the Taliban takeover of Afghanistan received wider attention throughout the globe. This is mostly because of the involvement and the subsequent failure of the US operations in the region.

More than 765 people have been killed by state security forces and over 4,700 people, including the country’s democratically elected leaders, arrested ever since the military seized control of Myanmar. Meanwhile, a gut-wrenching video of 2 people falling to death from an American plane that was taking off with people clinging on to it from the outside is making rounds of the internet.

The international media based out of America have been running stories about Afghanistan since the day the Taliban took over and have shifted versions in the process, much like the Indian media. While at first, they talked about how the war was economically exhausting for the US, they later shifted to America playing hero with a jam-packed evacuation flight and pictures of the US soldiers holding Afghan babies in their arms. And, of late, talk about the Lithium rich natural reserves that has been playing on these channels.

While the military coup de tat of Myanmar, the overthrowing and arrest of a Nobel Peace Prize laureate and the cycle of killings and violence in the country have failed to garner the attention of the international media, the Taliban’s take over of Afghanistan has been playing non-stop with the US being portrayed as “saviour”.

What the media miss noticing is that 20 years, four Presidents, 170,000 human lives and about US$2 trillion later, the US forces successfully replaced the Taliban with the Taliban.